Intro to programming an EEPROM with a 6502

The Kickstarter edition of the VIC-1112 IEEE-488 adapter has an EEPROM included on it to enable software updates or even general firmware hacking without removing the IC.  These devices are simple to program, but not quite as simple as just poke'ing ram.  The IC's need some time to complete a write before they can be accessed again, and indicate their finished state by returning the data that was written to them.

Let's explore the process of writing to an EEPROM using a generic 6502 system as a model, and expand on using a VIC-20 to do the work later.  I tested some simple write code using byte mode to simplify the code's logic.  Since the device is only 8,192 bytes it should finish in a reasonable time in spite of not using page mode.

Here's my first test, a simple program to write 256 bytes in a row to the EEPROM.

Let's add a timeout in the loop:


The change is pretty straightforward: the .X register is used as a timer since we can't assume the system has a hardware timer available.  Datasheets indicate 10ms maximum is required for writing the EEPROM.  Let's allow twice that. That requires the timeout to give up after a maximum of 20,000 cycles.


The total count inside the loop is fourteen cycles.  Considering it will loop a maximum of 256 times before giving up, that's 3,584 cycles, or 3.5ms at 1MHz.  We need to add another 16,340 cycles to the overall loop, which is 65 cycles per loop, minimum.  Since the loop exits when the write's complete, waiting longer is harmless.  There's a few ways to waste some time.  NOP'ing it out is inefficient; requiring 22 NOPs.  How about a nested loop?  We're out of registers:  .A is our value to compare, .X is the failure counter, and .Y is our index.  We'll have to save and restore a register each time the loop runs, which is easiest to do with .A on NMOS 6502's.  We'll use it for our nested loop counter.


This requires 8 cycles on entry, and 5 on exit.  The exit may look off; it's offset for the 'bne dloop' only taking two cycles instead of three when falling through.  The center is 8 cycles, occuring 256 times.  That's 2048 in all, or 2.048ms.  Adding the head and tail brings us to 2061 cycles in all.  With this, our compare loop interior becomes quite efficient at wasting time.  The interior moves up from 14 cycles to 2075 cycles,  and repeating 256 times gives a delay of 531,200 cycles, offering over a half second for the EEPROM to finish its write before the routine gives up on the EEPROM.  Perfect!


There are some considerations to be kept in mind when programming the EEPROM.  First, you obviously can't be running code from the device while programming it.  Data read back isn't valid until the write's complete.  Second, if you're streaming from a file to the EEPROM, you'll have to ensure it's not being used to load the data from mass storage.

There are also many other considerations, such as the program's inability to program more than 256 bytes at a time.

Covering some of these as well as enabling write mode on the Kickstarter 1112 will be covered later on, as this was intended to be more of an intro post for programming EEPROMs on your system.

-David
Posted by Unknown at 2:11 PM No comments:

After some trial an error with the new design, the redesigned Fastload clone FREELOAD, is now available from Victwenty.org! 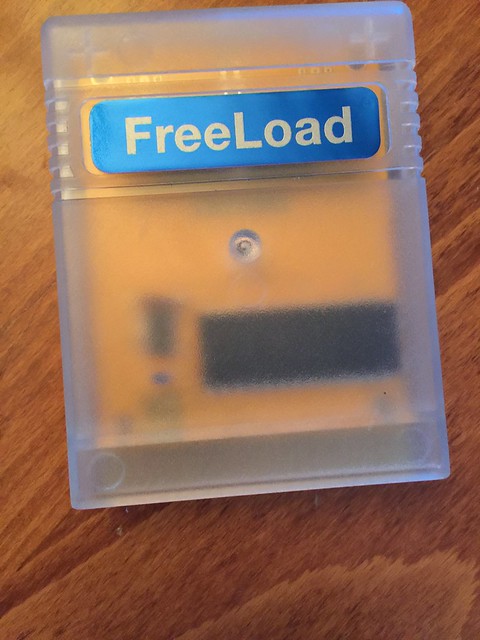 Freeload in my 64 Reloaded showing the activity light hidden under the label!

Freeload is 100% Epyx Fastload compatible and has been tested extensively with SD2IEC and normal Commodore peripherals.

A big thank you to Dale at DDI for this newly redesigned PCB and thanks to Elecrow for not letting me down with not only function but form, these boards are beautiful! 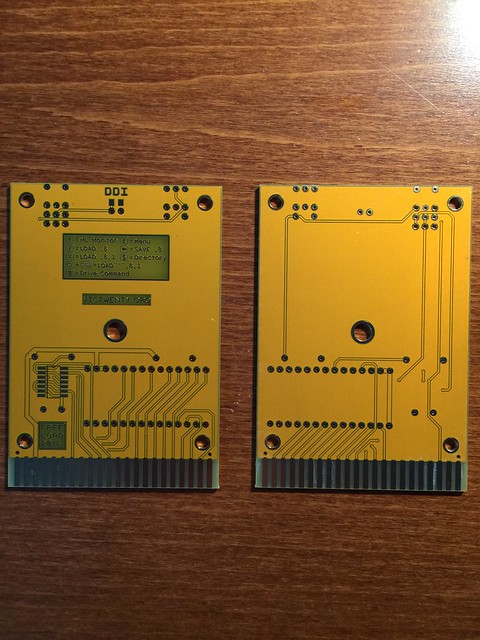 These are available directly from me now and in my Etsy store before Christmas!!
Posted by Mark at 7:05 PM 1 comment:

After months of planning and talks about reissuing DDI Telengard on Cartridge, it has finally arrived.  And it is better than ever!  Back in 2014 DDI made a limited run of 10 Telengard Cartridges for ECCC/VCFMW and they were a hit! 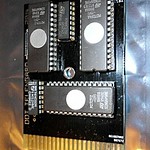 They sold out day one and after the show, the project was dead (I was the lucky recipient of the first as Dale knew I had a soft spot for the game!) 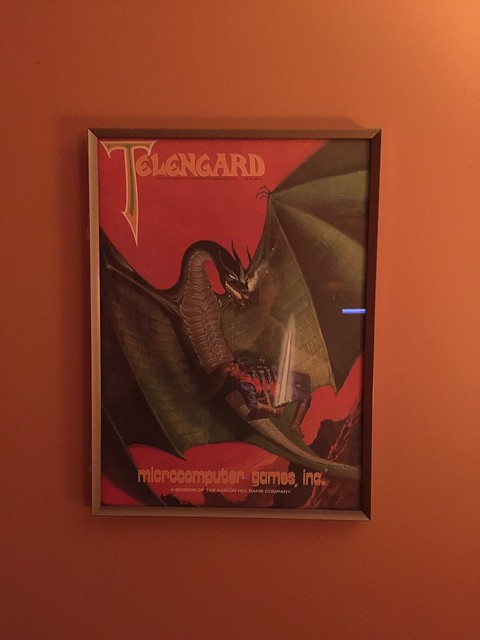 My Telengard poster in my living room

And that was that until earlier this year.  I was going through my cart collection and thought it would be too bad if more people couldn't enjoy this game on cartridge.  So after a few other projects wrapped up, I approached Dale about re-releasing the 2014 PCB.  He was open to the idea but thought that just reissuing the original board wasn't enough for 2016.  So the idea to go one better was born.  After we finished our version of the Multimax project, we set our sights on Telengard!

The first idea was to use a better board. Dale had many other designs and he came up with the idea to add a title screen and SID music.  Dale compiled an excellent image which includes his Character Editor and many other easter eggs (he says I probably haven't found them all myself) and we set about testing the image in an old version of WinVICE. 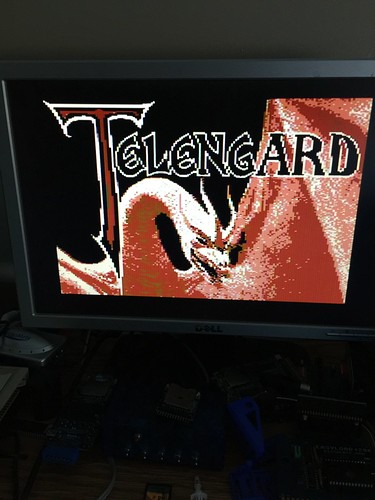 In mid October I sent the PCB design out to the board house to be manufactured and started thinking about cartridge cases and artwork.  I was seriously considering just making a cartridge label and calling it a day until I happened upon DrunknRetros website.  He had made some really nice looking artwork to go with his CPR3 based copy of Telengard.

I immediately emailed him about the possibility of doing something similar for this release.  What I found was a kindred spirit in Derek and he was happy to oblige.  I have to say he went above and beyond to make this release something special.  I know he has the same nostalgic feelings about these games as I do and I am happy to have made another new friend in the retro scene. 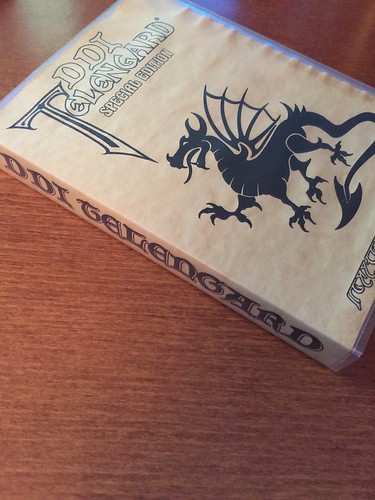 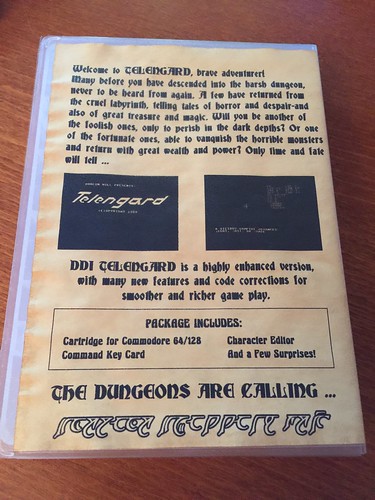 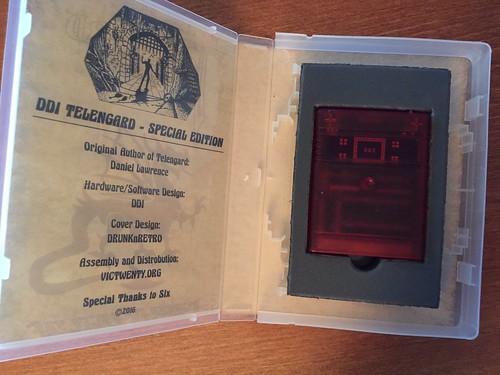 So with an awesome new cartridge image and incredible artwork (the pages are all hand stained and aged) we have put together what I consider a commercial quality release.

There are a few surprises, some the easter eggs in the image I spoke about and one that I will not have a picture of here yet, but it certainly gives this release a 1980s era feel for packaging.

If you have not seen or heard of DDI Telengard, please read the DDI Telengard History linked on the right hand  side of this page.  It was written by Dale himself and is a great read.

I cannot thank Dale and Derek enough for making this project possible, I could not have done it without them!

If you would like to buy one of these, I will have them for sale starting Saturday Dec 2nd and will post an update at the start of World of Commodore!
Posted by Mark at 1:22 AM No comments: